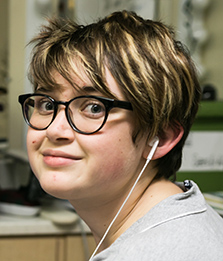 “Lights, camera, action!” is a phrase that Bethany Grabiec, Vice President, Employment Counsel at Paramount Pictures, is very familiar with. Bethany’s journey to the West Coast, however, started in Buffalo and more specifically, at SEM.

Bethany graduated from SEM in 1994 and describes it as very small and somewhat intense, but at the same time, it fostered an environment where girls could be independent. At the time Bethany attended SEM on the Wincenc music scholarship, the head of school was Robert Foster, but by the time she graduated, the head was Sally Briggs.

Throughout her time at SEM, Bethany was involved in music and theater.  She played Glinda the Good Witch in the Summer at Sem production of “The Wizard of Oz” the summer prior to her freshman year and played the role of Agnes Gooch in the Spring Musical “Mame” during her freshman year.  Bethany continued to perform with the Glee Club throughout her time at Sem and gave a senior vocal recital to the school just prior to graduation.  Bethany gave regular solo performances at morning meetings in the Chapel.  She also performed in numerous musicals and choral groups at St. Joseph’s Collegiate Institute and the Gow School.

Bethany continued to enrich her performing arts education when she attended the renowned school of music at Indiana University. After her freshman year, however, Bethany realized that music was not the career that she wanted to pursue and transferred to Barnard College in New York City. On what she explained as a whim but based in a life-long interest in Russia and Eastern Europe, Bethany declared herself a Russian Studies major. Upon graduating from Barnard in 1998, Bethany decided that she wanted to put her Russian language skills to real-life use. Thus, Bethany enrolled in a post-graduate program in Moscow for six months from June-December, 1998. Bethany explained her time in Russia as interesting to say the least. While in Russia, Bethany continued to study Russian language at a private university in Moscow while interning at the international law firm Clifford Chance.  However, while in Russia, the economy collapsed and many Western businesses were reevaluating their Russian presence. Bethany explained that at that time, things became very tumultuous and she knew it was time to leave.

Upon returning from Russia, Bethany was unsure of her next step, but knew that she wanted warm weather, so she took a leap of faith, moved out to Los Angeles, and began working in the entertainment industry as an executive assistant in the General Counsel’s office at Artisan Entertainment, which became Lionsgate Films. Impressively, Bethany simultaneously enrolled herself at University of Southern California, where she attained a Masters in Communication Management. After she experienced the legal side of the entertainment industry, Bethany decided to pursue law as a career, and attended University of California, Hastings College of the Law in San Francisco. She couldn’t stay away from L.A. for too long, though, and moved back upon graduating from law school. Bethany explained that she really enjoyed her employment law classes and clinics in law school, which is what led her to work for Jackson Lewis, PC, a national labor and employment law firm. She spent nine years there practicing employment defense in the L.A. office, but realized she wanted a new challenge in her career.  In April 2013, an employment counsel position opened up at Paramount Pictures and Bethany jumped on that opportunity.  In her current role, Bethany is part of the larger ViacomCBS employment law team and provides advice and counsel on employment-related matters for the studio, manages litigation, and works to ensure legal compliance on employment related issues.  She absolutely loves her job at Paramount and has no plans to leave.  Bethany is also happily married to Matthew Jacobs, a Los Angeles based real estate developer.  They have two children, Sam (5) and Sadie (2), who are now also fluent in Russian thanks to their Russian nanny.

When reflecting on her career path and life after SEM, Bethany said that SEM gave her the confidence to present her ideas and not fear that they would be invalidated. She feels that she learned “not to be afraid to participate in a discussion that she was invited to be a part of.” Bethany believes that going to a small school gave her “an immense level of confidence and an ability to participate when thrown into a bigger pond.” Bethany attributes her impressive career path to her adaptability and “taking a chance on a path that wasn’t necessarily [hers].” Bethany’s sentiments are most definitely what makes the SEM experience a great and unique one. Young women have the opportunity to strengthen their skills and develop themselves to be independent trailblazers in whatever career path they choose, and Bethany is a shining example of just that.

As freshmen at SEM, we were taught that with hard work and effort, there was no barrier we couldn’t overcome, nothing we couldn’t become or accomplish. We were encouraged to think of our futures as politicians, poets, engineers, or anesthesiologists, but if you’d asked me at the age of fourteen what I most wanted to be, my answer would have been simple: a SEM senior. And to me, the epitome of these enviable demi-gods was Naima Pearce.

Naima, our student government president, infused a life into each day that we freshmen loved, even the most mundane morning announcements were funny and warm, and when she told us to “Have a great day and get to class,” we made it our personal mission to carpe diem. She got to know everyone, seemingly spending as many free periods sitting with us in the Study Hall as she did socializing in the senior lounge. She was a star on the tennis court and in the classroom. Most of all, she made us laugh. In addition to her daily witticisms, Naima entertained us via SEM Spotlight, a club that produced video news comedy segments. Each time a new one aired, we howled until our stomachs hurt.

Thirteen years later, Naima’s still in the funny business. She’s currently working as a supervising writer for Tooning Out the News, and she writes for Our Cartoon President, both produced by Stephen Colbert. Despite her drive and natural talent, Naima encountered obstacles on this career path. After graduating from University of Pennsylvania during a recession, she attempted to break into the world of news/comedy anyway she could. She worked for NPR, then as an NBC page, then at MSNBC as an editor and writer. She recalled during that time that she was always filling out applications to try to work on comedy shows.” She described how exclusive comedy writing can be: “It’s invite-only to even apply to be a comedy writer. You need an agent or a manager to write on a comedy show, but they won’t take you unless you write on a show. There’s a reason why most comedy writer’s rooms used to be composed of white males that went to a narrow group of elite schools. The Lampoon was a feeder system. They often asked the writers if they knew anyone, and they knew other white guys. You also need to have an enormous safety net because you need to have some money in your pocket already. A lot of the people that aren’t rich white guys have more of a winding road. Eventually, I got there with the help of some friends and because this particular job required a set of skills that I had.”

At SEM, we learned the value of making space and paving the way. Just as my classmates admired (in my case, idolized) Naima, she looked up to the SEM seniors that preceded her. She credits SEM Spotlight founders Roseanne Hines, Alexis Peterson, and Rachel Pikus with inspiring and mentoring her: “I was trying to lift a page from their book, trying to build some kind of comedic narrative. Trying to entertain under the guise of being able to inform.”

It was with this altruistic attitude that Naima spoke at SEM’s 2018 commencement, a little more than a decade after her own graduation. From the balcony at Westminster, I felt the freshmen’s admiration as they looked up at the seniors on the stage. As Naima walked to the podium to deliver her address, I understood exactly how they felt.

What's a SEM girl? Smart, self-confident, daring, articulate, able to laugh at herself. There is no one more fitting to begin the SEMsational Stories series than Casey Perley. She graduated from SEM in 2004, at the top of her class, with 12 AP credits, all with scores of 4's or 5's; Yale University undergraduate degree in Molecular Biophysics and Biochemistry, Duke University PhD in Molecular Genetics and Microbiology. That would seem like an end-point for most mortals. It's not for Casey.

So what is she in the process of becoming? She is currently a postdoctoral fellow at the U.S. Army Medical Research Institute of Infectious Diseases (USAMRIID), doing translational science and biodefense work while she plays with two (not one, but two) symphony orchestras: The Frederick Symphony Orchestra and the Symphony of the Potomac. She's also involved with music programs for kids in the area, because as she said, "kids count." 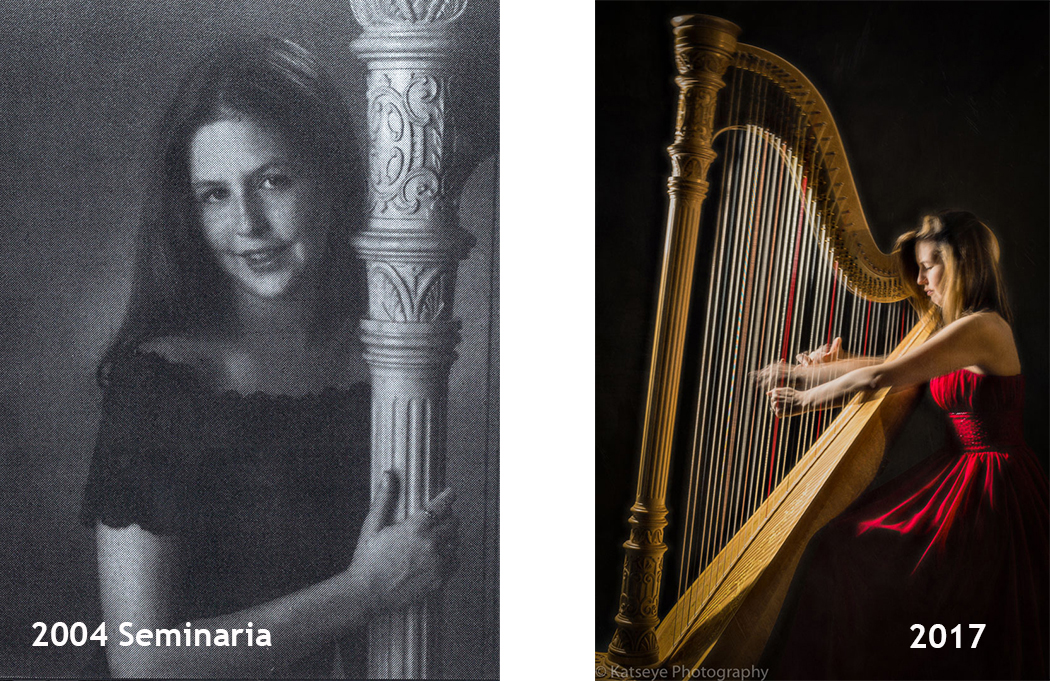 Starting in her freshman year at SEM, Casey took every science and math course available and conquered them all, including two college level calculus classes because her teacher, Linda Goodman, came in at 7 AM three days a week to teach a class of two for her and Emi Ovitt Kim '04. "I always loved science," she said, "I was the one who brought my Fisher-Price microscope to 5-year-olds' tea parties."

Casey was a Jacket but describes herself as "hopeless" at sports (belied by her running habit now as an adult!). So what did she do at SEM to participate in sports? She got resourceful. She managed both the badminton and soccer teams, which benefited because mental math abilities enabled her to diagnose vulnerabilities in the opposition.

She says of her time at SEM: "I loved history, I loved science, I loved music, I loved math and at SEM, I could do it all, and I did!" She credits SEM for teaching her that she could achieve everything — Mrs. Goodman, Mr. Schooley, the arts staff who produced the scores she wrote for two school plays (Heart of Darkness and A Midsummer Night's Dream) — all of whom asked her, what can we do to challenge you? "SEM allowed me to be intellectually curious and I didn't have to leave anything important on the table." 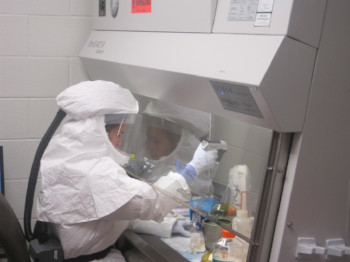 Casey in the laboratory at the USAMRIID

Casey is grateful to her parents Michael Perley and Tama Crowell, for encouraging her love of learning and music and for allowing her to come to SEM. "Parents who can, should encourage their daughters to come to SEM – for the flexible curriculum, the number of PhD teachers, for the love of learning, the nurturing of curiosity, and for the diversity in the student body, particularly provided by the residential program."

She hopes to have kids someday, and she dreams of sending her future daughter to board at SEM, where she can spend weekends with her grandparents! "SEM did more than provide me with excellent preparation for college and for life. It taught me that girls can do anything, and instilled in me a love of subjects outside of my chosen field. If I have a daughter, I can't imagine a better way to pass those lessons and a slightly overzealous love for everything yellow jacket on to her, than by sending her to SEM!"